Every Fashion Week in New York brings exciting new coverage, meeting new people and more.  This season we were excited to cover one show featuring Austin designer Isabella Rose Taylor.  The dust has settled since we returned back to Austin and I’ve finally caught up on some much-needed rest so it’s time to share with you our experience backstage and at the end of the runway.

The enormous outpouring of press for the 13-year old designer is impressive since her show. Don’t believe me? Just head over to her Facebook page and it reads like a who’s who list of broadcasting and editorial royalty.  There are countless mentions of humble appreciation from Isabella to those supporting her fashion dream.

It was exciting to see Isabella’s vision come to life.  After all, we have been photographing Isabella’s collections since she started presenting pieces to the Austin market a few years ago.  She designed a dress and modeled an adorable piece at the first Fashionably Pink fashion show. I fondly remember her tween models backstage goofing around at her first Austin Fashion Week in 2012.   Let’s not forget her Golden Boot “Rising Star” award at the  2013 Austin Fashion Awards. 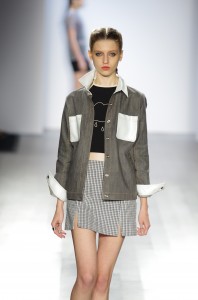 We arrived at the Style 360 Fashion Week venue on the Pier off the Hudson River.  We got checked in by the Beyond PR Group and chatted with Beth Feldman and thanked her again for granting us access to cover our local darling.   Vendors were setting up their tables in an open space on the first level, and upstairs, the space was set for Isabella’s runway show. White chairs lined the runway, each home to a swag bag embellished with the Dell logo.

The show music and runway lights were being tested when I spotted Isabella sitting in the front row.  Her smile grew and grew as she watched each model make her way up and down the runway.  Isabella was calm and poised dressed in a brown leather skirt and top accessorized with hightop sneakers.   Her enthusiasm shone through as she granted interviews from OK Magazine, Stylecaster, Time Warner Cable News/New York and countless more.  I was able to squeeze in a quick hello viral video to say hello to all of you back in Austin.

Backstage it was an Austin homecoming as we hugged stylist and Austin Rising Star, Cristina Facundo and sister Sara who was steaming garments to make them runway ready.  Cristina immediately mentioned how nice it was to see a familiar face from home and I couldn’t have agreed more.

The Isabella hair and makeup team put together a fun a whimsical look complete with  fresh, simple makeup. 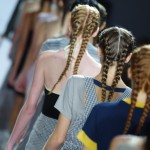 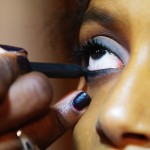 Michele Carrillo, with Not Your Mother’s Hair products assisted  with the hair direction for the show.  “We created the beautiful french braids which is very young and  goes so well with Isabella’s designs”, added Carrillo.

Lead makeup artist Orlando Santiago talked about the direction for the model’s makeup.  “The inspiration for Isabella’s show is young and fresh.  We used a heavier liner, and a beautiful sculpted eye”, said Santiago.  They finished up with a pressed in coral lip, dewey cheeks, dewey skin and natural brow.

Soon the white chairs were filled with buyers and editors. The show lights went down and pop star Olivia Somerlyn performed her hit song Parachute.

The models took to the runway.  Pieces in the collections ranged from jumpsuits to simple shift dresses and each model were accessorized with Dell tablets embossed with Isabella’s artwork.  Fringed cloud t-shirts and on-trend sheer tops were also shown.

Maria May attended the show and was Isabella’s first fit model and she loved the collection.  “My favorite piece was a shear  top with the lace and with the loose pants and the general cloud theme throughout the collection, everything about it was great”, added May.


And before you knew it, Isabella made her finale walk to a cheering crowd.

The show may be over but Isabella is just getting started.

See the entire picture gallery from the NYFW show.