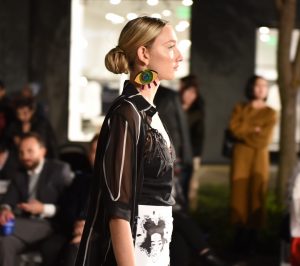 Mother Nature decided to shed some great cool fall temps last weekend to get a fashionable crowd in the mood to kick off the new Fall edition of Fashion For Good fashion events.   The big two-day line-up was held at the Domain, the first time for the shows, and featured Domain retailers, local and national designers who showed their latest collections for the Runway Designers, Haute Dogs and Runways Re:Defined shows.

Models took to the blocked-off street turned runway in front of Neiman Marcus which made for one of the longest fashion runways, approximately 250 feet long.  And speaking of models, the runways shows focused on a more inclusive model runway with a diverse model lineup to include all shapes, sizes, and ethnicities for all three events.

The fashions were also as diverse as the models and here are Fashionably Austin’s quick favorite picks. from the runway.  The elegant black and white evening gown embellished with beads and shine by Austin designer Lika Steel was a runway favorite to the impeccably tailored menswear from Ross Bennett, there was something for everyone’s fashion taste from the diverse lineup of designers. 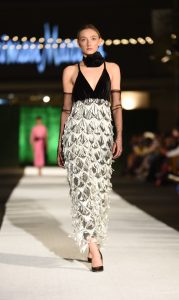 The event also helped raise funds for a number of Austin’s non-profits for the fashion event brand.  Fashion For Good founder Matt Swinney has changed things up from his previous shows just a bit and is now focusing a more charitable brand around the event and will repeat the same platform for the planned Spring 2020 shows at the Domain.

For the inaugural FFG event, nearly a dozen collections were featured on night one, Runway Designers, with a sneak peek at some early designs from the University of Texas Senior designers and looks from the young talented designers from the Austin School of Fashion Design.  The crowd also was treated to a showing from recognizable Project Runway designers.  Veteran Amanda Valentine, Season 11 and PRW All-Stars designer, Anthony Ryan Season 9 and winner of PRW All-Stars Season 2, Samantha Plasencia Season 13  and Brittany Allen  Season 18 designer. (show premiere is December 5)

For the second day of the event, two shows, Haute Dogs and Runways Re:Defined featured nearly 30 Austin influencers and celebrities with their pups.  Funds from the Haute Dogs event benefitted the Hounds for Heroes charity.  This Cedar Park non-profit provides dogs to veterans who are challenged by the visible and invisible wounds of war and to reduce stress for people in the workplace, the airport, the courts and schools.  The non-profit’s pups also visit nursing homes and hospitals and kids get to enjoy summer camp programs. 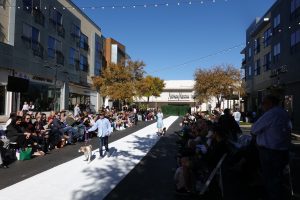 The Runways Re:Defined show featured models from nine organizations with individuals who were all sizes, gender and abilities.   For event founder Matt Swinney the Austin Speech Labs show was particularly moving.  “To see stroke survivors feel the power of the runway and do something that’s physically challenging for them and having the entire audience rooting them on through a standing ovation  — well, it doesn’t get a whole lot better than that”, added Swinney.