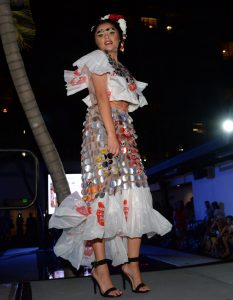 The most creative designers in Austin will compete for top fashion bragging rights at the Ninth annual Texas Campaign for the Environment’s Trash Makeover Challenge.  The show in previous years has always been a crowd-pleaser with most people saying, “that’s made of what??” The Trash Makeover Challenge was created to raise awareness and funds for zero waste and recycling issues.  The platform has also raised more than $375,000 for TCE.

Each participating designer will showcase a garment made from 90% of recycled materials and reconstructed textiles.  In past years, gowns have been constructed with plastic grocery bags, round placemats, bike tires and machinery hardware.

For the annual event, the theme is Sheroes and Heros.  “So we expect to see fashions from history, myths, comics and beyond and we encourage guests to dress in costume as well”, said Texas Campaign for the Environment’s Executive Director Robin Schneider.

Teams of fashion designers, hairstylists, make-up artists and models will compete for a $1,200 cash prize for one design; $1,600 for two designs.  The judges for the competition include former Texas State Senator Wendy Davis; Samuel Alexander, founder and CEO, Concept 2 Consumption; Linda Asaf, Linda Asaf Design; Alberta Phillips, an Austin journalist who is also a Commissioner on the City of Austin’s Joint Sustainability Commission and serves on the governing board of the Ending Community Homelessness Board (ECHO). 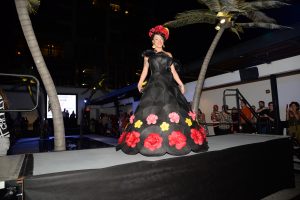 The silent auction will include ACL passes, jewelry, restaurant gift cards, tickets to performances, activities and museums, consultations for landscaping and architecture, gift baskets, health and beauty services, classes and much more.

A performance by drag queens Diana Fyre and Luna Lovecraft will kick off an after-show dance party.

About the Texas Campaign for the Environment

The 501(c)(4) non-profit organization empowers Texans to fight pollution through sustained grassroots organizing campaigns that shift corporate and governmental environmental policy. Headquartered in Austin, TCE has offices in Dallas and Houston and a presence in all 181 legislative districts in the state. Every year activists from the three offices knock on nearly 500,000 doors to hold face-to-face conversations about public health and environmental issues. For more information, visit the website at www.texasenvironment.org.

Fashionably Austin will attend the event and will share the 2019 images.