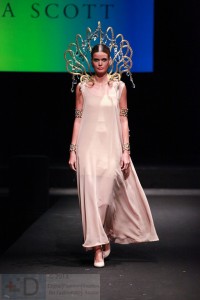 The 5th Annual Austin Fashion Awards wrapped up an exciting nine days of fashion events from a well-attended kick off party called NOIR, make up competition – ENCORE, designer appearances at boutiques and more. Folks made their way down the red carpet at the Austin Music Hall and the Fashionably Austin team, Gregg Cestaro, Sparky Anderson and myself interviewed the fashionably dressed folks as they made their way down the line of press and photographers, which grows each year by the way.
A familiar face from Project Runway was Austin’s own Daniel Esquivel. His black and white suit was accessorized with a leather rabbit mask that was a gift, and said, “fashion should be fun!”, which is why he decided to make a bunny fashion statement. He definitely stood out, but in a memorable and great way! He also pointed out that he had made his friends dress (who walked the red carpet with him) three hours before the awards! It was a black, flowy, sheer, complete with silver leather laser cut polka dots.

NBC’s Fashion Star, Ross Bennett, and wife Erin Bennett wore one her hubby’s own creation. The long shimmery white gown had a long plunging back accented with a long hanging necklace. Ross wore one of his signature suits paired with a bright purple bow tie that was hard to miss coming down the red carpet! Austin Fashion Week founder, Matt Swinney, and his wife, Kara arrived on the red carpet looking as fabulous as ever…styled by Rising Star winner Sandra Antoun. Daniel Esquivel designed Kara’s dress, which consisted of a silver leather bodice with a black sheer fabric skirt that flowed perfectly as she walked. Kara said, “I feel quite honored to wear one of his pieces”.
The evening’s emcee was Sandy from the JB and Sandy morning show at Mix 94.7. This was the second year Sandy hosted the awards ceremony. The following is the list of winner announced at the event.
Critics choice – Best Mash Up Photo – Team EON
Gerry Hanan – Photographer
Atelier Benson – Designer
Hair – Ivy Kim
Model – Stella Sebit
People’s Choice – Best Mash Up Photo – Team Vintage Deity
Gregg Cestaro – Photographer
Model – Britany Walker
Sarah McLaughlin Reed of Sarah Eileen – Designer
Makeup – Mandy Hernandez
Hair – Joseph Theis
Stylist – Sandra Antoun
The first Trailblazer award went to our very own, creator of Fashionably Austin: Cheryl Bemis! Cheryl accepted the award wearing a gold sequin David Meister mermaid-style gown accessorized by a Jeannie Vianney cuff bracelet and Cynthia Bloom black and gold crystal custom made drop earrings. Trailblazer awards also went to editor Lance Avery Morgan, Austin Chronicle and designer Stephen MacMillian Moser, cosmetic entrepreuner Rochelle Rae, and jewelry designer, Kendra Scott.
Rising Star receipients went to, NBC Fashion Star Season 2 designer, Priscilla Barroso, Tween Designer Isabella Rose Taylor, Magic Dress inventor Jennifer Martinson, Stylist Sandra Antoun and Project Runway Finalist Designer Daniel Esquivel.
Four well-know Austin designers sent their collections down the runway as well during the ceremony. Kendra Scott’s over-the-top runway jewelry was styled with elaborate racks hung with jewels and bejeweled coat of arms. Models donned large, eye catching, jeweled necklaces that draped over their dresses, with necklaces that hung to their knees and multiple bracelets were worn all the way and down the models arms. My favorite was a peacock looking piece with different shades of turquoise and blue stones covered the models chest with gold metal and blue feathers that extended from the models shoulders.
Dawn Younger-Smith of Boudoir Queen sent down an impeccable display of vintage-styled looks which Dawn is know for. Most of her pieces are made from finds she uncovers in her travels but recently she did incorporate new fabrics into her collection. On the runway, each look was a beautiful display of wearable art down to the shoes. If you ever get to see a show by Boudoir Queen, you won’t be disappointed and be sure to bring your camera….it’s a photographers dream for detail.
Designer Gail Chovan continued her promise from the kick off party to add white pieces to her typical all black collections, something she did for the first time, and I can say that alone made Austin Fashion history. Pieces were mixed with leather and draped to perfection in her signature “Gail Style.”
Stephen Moser’s show was as dramatic as you would expect, showing a theatrical Pagen Wedding complete with a fire-eater. Every model wore an adorned headpiece that was magnificently designed and reminiscent of something that was out of a Hollywood movie. Feathers, gold, capes, and red velvet were key elements in Moser’s collection. Not to forget the male and female models that wore antlers on their heads. Yep, that’s a Moser show.
Until next year, this wraps up the coverage for yet another successful Austin Fashion Week.

The second night of AFW’s runway/marketplace brought out an even bigger and better-dressed crowd than Wednesday’s, as fans of…

It’s hard to believe that this is the fifth annual Austin Fashion Week. The time has certainly flown by,…

Keeping along with the current success of this year’s Fashion Week, the Steiner Ranch children’s boutique Millie and Mox…

Those who are into style attended The Summer Styles at Sunset show Tuesday night at Abel’s on the Lake….