Austin fashion made a huge appearance this year at the 2015 Grammy’s. Austinites, Daniel Esquivel (of Project Runway Season 11 and Project Runway All Stars) and jewelers Beth McElhaney and Jamie Pope of Liz James Designs collaborated in creating Austin musician Christine Albert’s stunning wardrobe, which appeared at countless awards ceremonies. The Trustee Chair looked LA-fabulous in Esquivel, McElhaney’s and James incredible custom designs.
Beth McElhaney and Daniel have worked together in the past at last year’s Austin Fashion Week, where she showed her jewelry with his clothing line at the Project Runway All Stars Show. The pair was enthusiastic to team up again for the 2015 Grammy’s, a companionship Esquivel described as “wholly organic.” McElhaney called her partner-in-design “amazingly talented and creative …our work complements each others’ very well.” 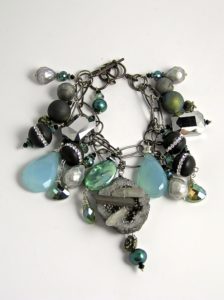 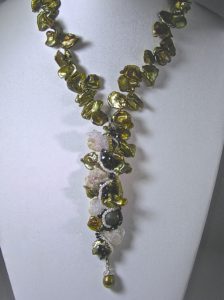 McElhaney described the experience as “unbelievable…I was just honored to be part of the Grammy’s in my own small way.” Except her projects are anything but small; the jeweler has big plans for Beth McElhaney Jewelry (previously Personal Adornments). She’s been collecting flora and fauna photos for some time—flowers, animals, insects, birds, landscapes—all of which she’ll be looking to for inspiration in her upcoming line. “I see spring dealing very much in nature, including lots of prints…shades of pink, purple, and orange…a lot of off-white and black. My jewelry will take on a more botanical-feel as I start to use my collected photos…using freshwater pearls and gemstones…from pastel to vibrant.” McElhaney’s Grammy line and other works will be presented at Capra and Cavelli’s Jefferson Square Store on March 11-13.
Another Austin designer also accessorized the Grammy trustee.  Jamie Pope of Liz James Designs collaborated with Christine’s stylist and with Esquivel to pick out some key pieces to finish off her Grammy week wardrobe.
“Christine came in to my studio for her fitting with Daniel and fell in love with several pieces of LizJames.  She and her stylist came and asked if she would be able to wear Liz James to the Grammy’s…of course I said yes!” said Pope.
“I was so excited to see Christine at several Grammy events wearing Liz James, it was such an honor.” 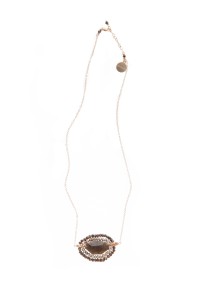 Jamie was most excited to see Daniels tuxedo jumpsuit paired with her Rebekkah necklace and Divya earrings! 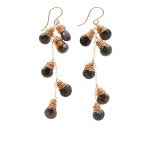 Esquivel was equally delighted to share about the Grammy’s, calling it “an honor to watch Christine [Albert] at the opening ceremony in my tuxedo jumpsuit…so humbling.” Like McElhaney, Esquivel has some big events in the near future, including shows in San Diego and Palm Springs in March, Austin Fashion Week in April, a fundraiser in Tucson, and Project Runway’s Werk Show in August. Esquivel looks forward to the “fun” future of his career (which the designer readily attributes to Cheryl Bemis of Fashionably Austin)—“there’s something for everybody…I like to see everybody’s point-of-view.” Similar to McElhaney, he also expects to see spring styles drawing from nature: “floral prints, different fabrics pieced together.” But of course, we look forward to his trademark black and white, a trend we hope to see at his upcoming shows.
« Texans in the Tents – February 2015
Noah Marion Quality Goods Hosts Instagram Gallery Show »