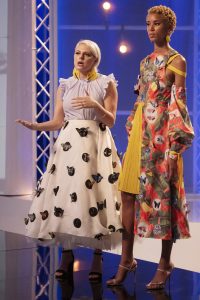 The creativity of the remaining Project Runway designers is being challenged and critiqued as the group gets smaller each week.  The judges are also becoming more picky about every design element to see who can cut the mustard as the winner of season 18.

For this week’s challenge, the designers were introduced to pop artist Ashley Longshore.  Ashley’s art has been widely compared to the famous pop artist Andy Warhol.  Ashley features loud prints and wild color combos which are staples for all of her work.  For Austin designer Brittany Allen this challenge would be right up her alley and she knew it.

“This is prints and it’s color and it’s Ashley Longshore.  If I “f” this up I probably won’t be able to show my face outside my house for the next year”, added Allen.

Each designer chose a bolt of printed Longshore fabric and went to work.  Brittany chose a print that had butterflies on it and decided to create her 3D treatment on her design to bring it to life. “I’m going to take an Exacto knife and I’m 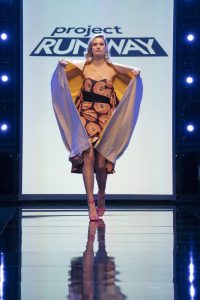 going to cut around it and back them and have them fly off the fabric”, added Allen.

If you’re from Austin you may remember at Austin Fashion Week 2019, Brittany showed a similar butterfly embellishment technique on some of her runway pieces.   The skirt she wore in this Project Runway episode was the skirt we saw at the Austin event and of course, we loved it.   Brittany does enjoy designing fashion that makes a statement and she was out to show what she’s got in this challenge.

Sergio designed a two-piece ensemble,  colorful cocktail dress topped off with a yellow cocoon jacket that would be unveiled on the runway.  As the look hit the runway, Sergio felt his look would put him in the top for this challenge.

“I couldn’t be happier.  The cocoon looks spectacular and model Severine did the reveal perfectly”, said Guadarrama. 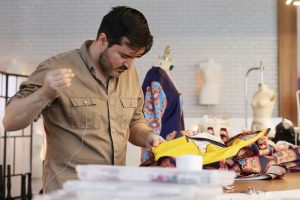 Judge Nina Garcia was elated how Brittany understood and celebrated how the Ashley Longshore collaboration with an artist looks like.

The guest judge was also impressed.  “She took my artwork and brought it to life”, said Longshore.

Congratulations to Brittany who was named the winner and is the second for the designer.  Sergio was named safe and was a top-scoring look.  Y’all are making Austin proud!