Story Written by: Sydney Mahl
For Dallas based designer Lauren Nicole, 2016 will be a year of special memories. At only fifteen years old, she debuted her first collection at Austin Fashion Week. Inspiration came early for this ingenue when she attended a fashion camp in New York over the summer where her passion was born.
“I had to create a fashion project to enter the camp so I started a blog, and I liked the idea of creating and writing about my own things, so I started sewing and taking sketching classes and it just has taken off so much from there,” said Nicole of her beginnings in the fashion industry. 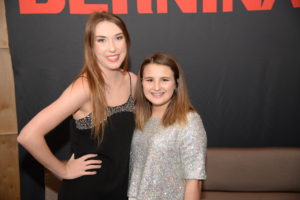 She has worked tirelessly to build her collection, and her hard work earned her a spot amongst Project Runway stars and established Austin designers. Her mature and cohesive collection featured sleek black, white, and grey pieces with the occasional pop of metallic silver.
smug“What inspired my collection was not just a thing or an object, but a feeling,” said Nicole, with sophistication beyond her years, “I want women to feel inspired, to be beautiful, to be confident and comfortable in their own skin.” 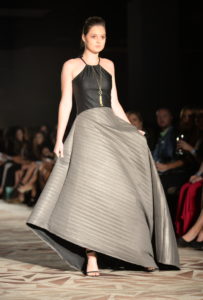 It’s safe to say that when most people were fifteen, being comfortable in their own skin had yet to be accomplished. Lauren Nicole, is dedicated to creating clothes that make women feel their best. “If my designs have done that, then I’ve done something good,” said Nicole.
Click Here to see Lauren’s Entire Collection Here! 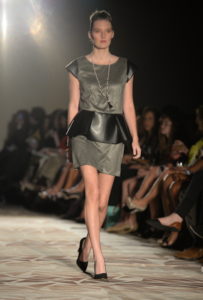 Lauren Nicole is also no stranger to staying busy, as she still attends high school in her hometown of San Antonio while designing. “My school is so supportive of me…I do try juggling it and it is hard but I make it work,” said Nicole.
And if debuting at Austin Fashion Week wasn’t enough, when asked what’s next, Lauren says she’s taking a couple weeks break, and well-deserved if you ask me.